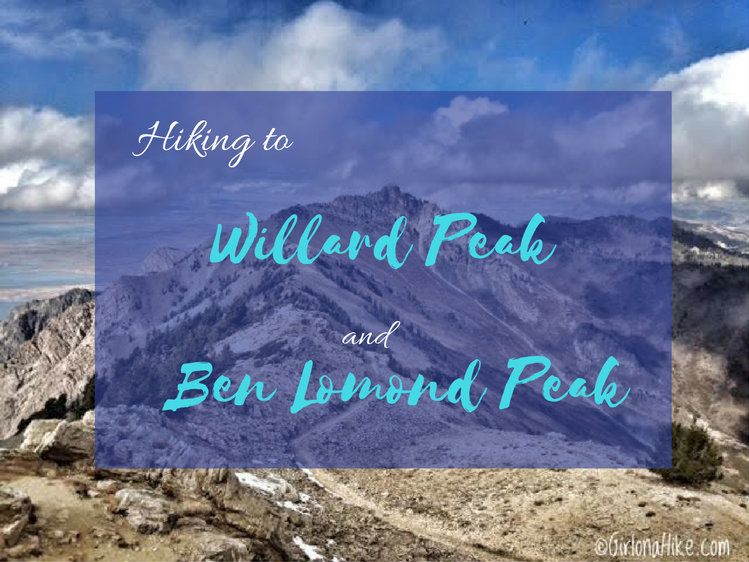 Willard Peak (9,763 ft) and Ben Lomond Peak (9,712 ft) are the two high points dominating the Northern end of the Wasatch Mountains, above Ogden, Utah. Willard Peak is the high point for Weber County, though it sees less than half the amount of hikers compared to the popular Ben Lomond Peak. Both are worthy summits, and to avoid having to come back on separate days to hike each one, do both in one trip.
There are several access points for starting your hike to each summit. The easiest way is via Willard Basin, which is only available to drive up from July 1 through October 31st (when the gates are open). Driving this narrow, winding, dirt road does require a 4X4 car such as a truck or jeep. Small, compact cars will not make it.
Both peaks are fairly easy, especially if you have some peak bagging experience. If you are a beginner hiker, you may find it more difficult. The trail starts from Willard Basin Campground, and passes by a high alpine lake before reaching the ridge. The hike up to Willard Peak follows a very lightly tracked trail marked by cairns, while hiking over to Ben Lomond is easier along a heavily trafficked trail due to popularity. The entire hike will offer amazing views of Willard Bay and the Great Salt Lake to the West, as well as the valleys to the East. On a clear day, you can see Mt. Ogden to the south as well.

From SLC, head north on I-15 and take exit 362. Drive 5.1 miles along HWY 91, and take the exit for 100 S in Mantua, UT. Turn right on Main St, which then turns into Willard Peak Road. Follow this road, which turns into a dirt road. Once you are on the dirt road, it will take you an hour to reach the trailhead, even though it’s only 8 miles away. Here is a driving map. Total drive time from SLC is about 2 hours. 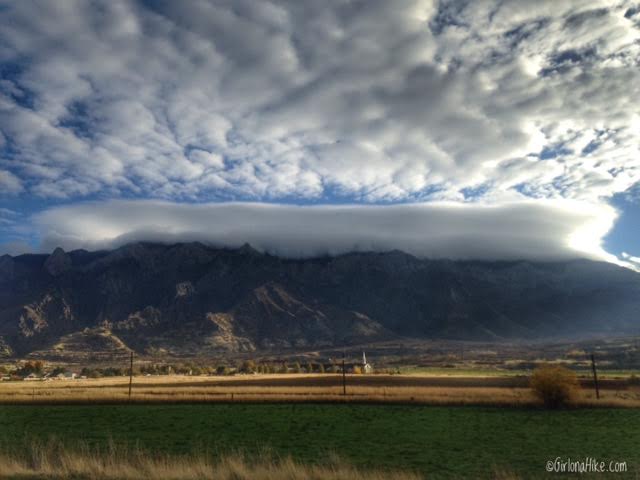 Driving below Willard and Ben along I-15. Looks like we would be hiking in the clouds that day! 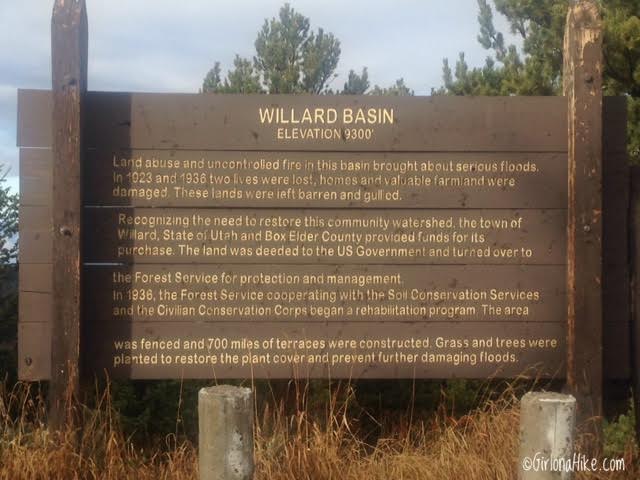 After driving for 45 minutes up the dirt road, you should see this very large brown sign. 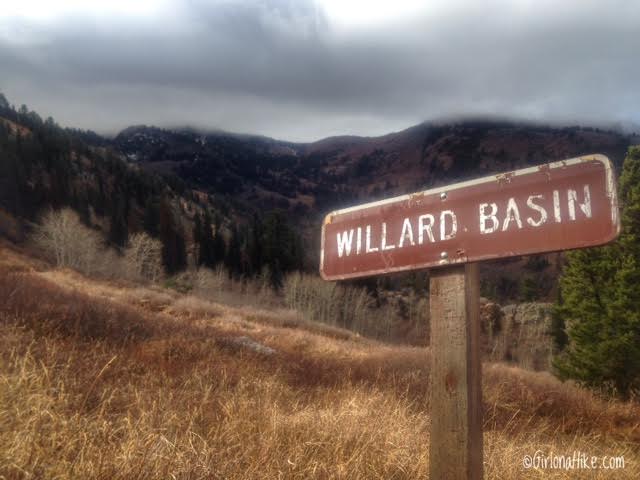 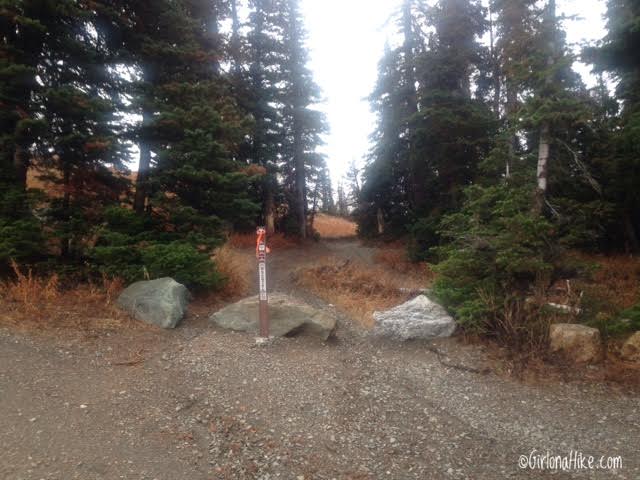 The trailhead is not marked off the dirt road, but it starts at the Willard Basin Campground. It is marked by this brown forest service pole and three large boulders.

After you walk up about 100 yards you should see the official TH sign. 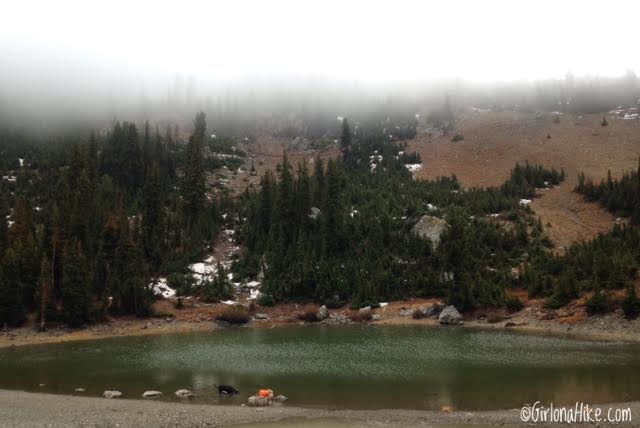 Reaching the alpine lake, we let the dogs take a dip. The trail continues to the left, and will wind it’s way up to the ridge. 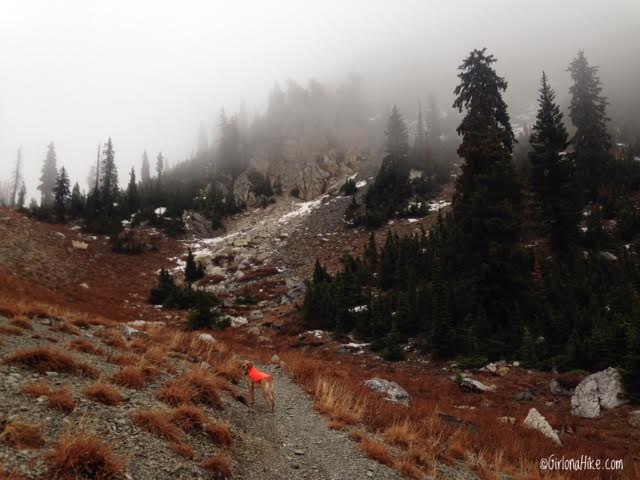 Working our way past the lake. 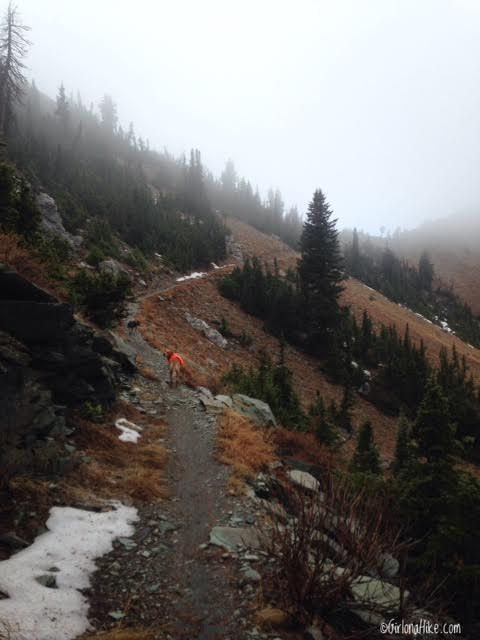 One switchback will take you to the ridge. 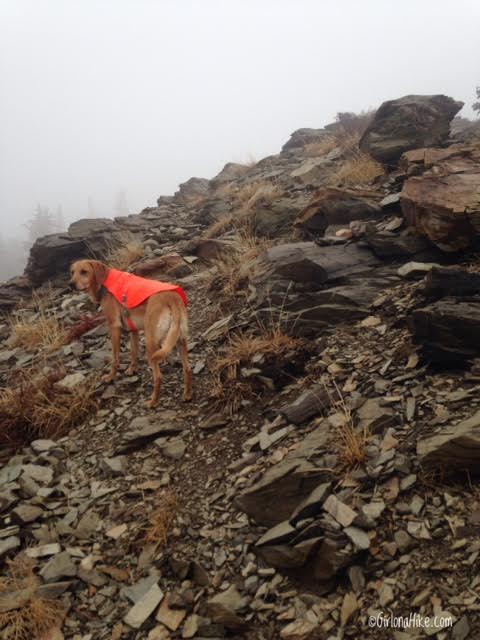 Once at the ridge, look for the very light trail that heads directly up the ridge leading to Willard Peak. You’ll see a trail that goes left, but in a more downward direction – don’t take that. As long as you stay on the ridge, you’ll reach the peak. Keep an eye out for cairns.

I made Charlie wear his Ruffwear Track Jacket in case we came across hunters. It also helps for visibility, so I could easily see him through the fog and clouds.

Hiking on the ridge we weren’t able to see anything from the weather.

You’ll work you way through a small rocky area. 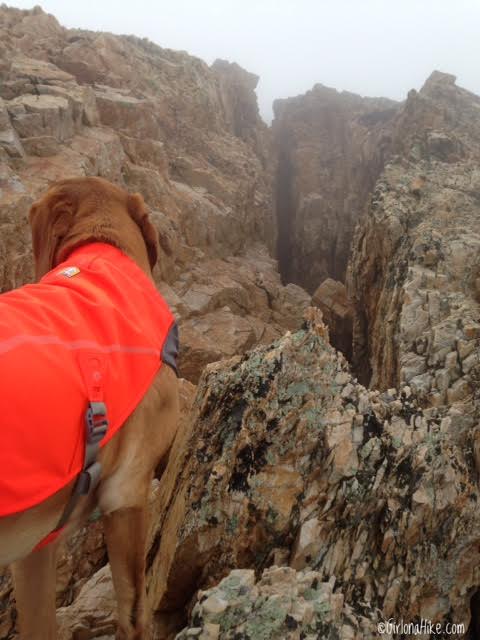 This part looked scary, but it was actually only maybe 8-10 feet deep. It’s very easy to hike around. 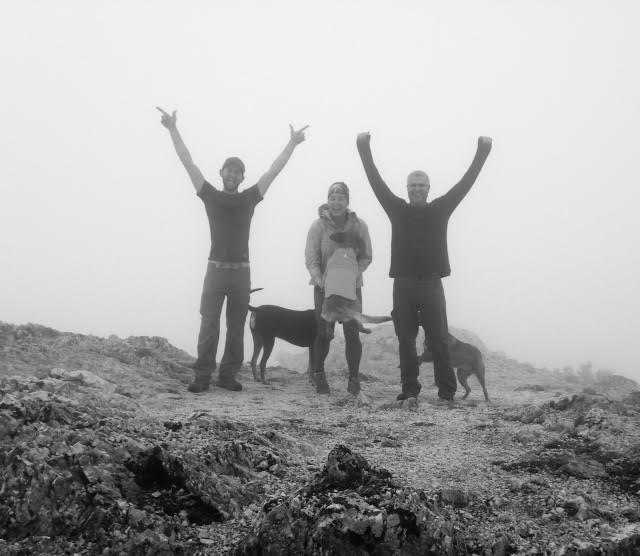 We made it to Willard Peak in 1 hour. It was much easier than I was expecting. From how rocky the peak looks from a distance, I though we would need to scramble up, but it was easy hiking the whole way up.

Group photo with some buddies, and Charlie mid-air. We couldn’t see a thing from being in the clouds! 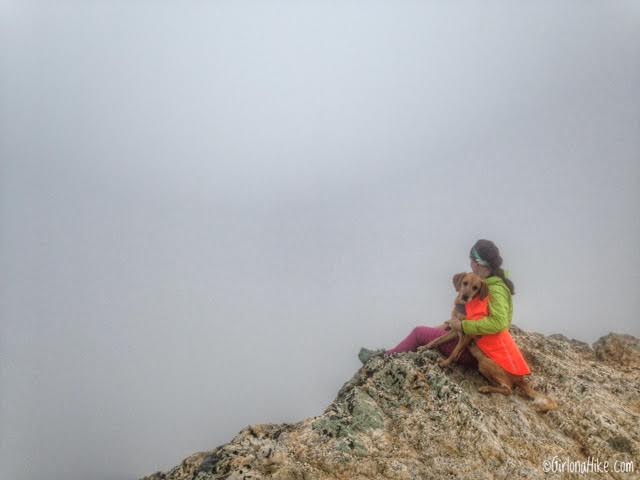 Trying to look over the edge.

After hanging out at the summit, we decided to hike back down the same way we came up (the North ridge), instead of going down the South ridge. The trail was easy to come up that way, and since we didn’t know what the other side looked like, we were afraid we would get cliffed out. Later, after the clouds had cleared, we could see that we really would have gotten cliffed out. I’m glad we went down the same way. 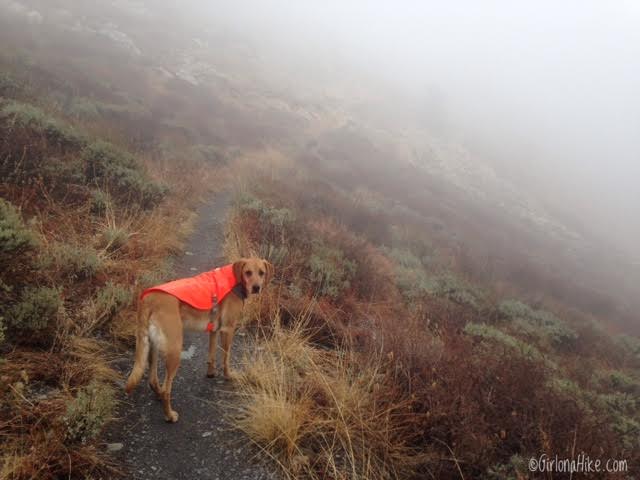 Back on the main trail, you will be hiking below Willard Peak, heading in a Southerly direction. 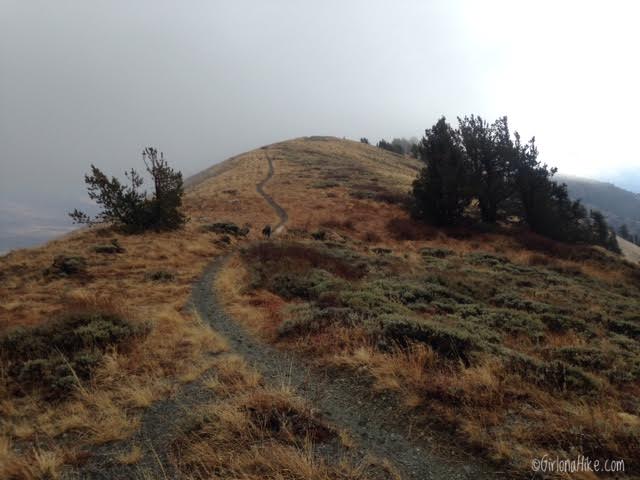 The next 2 miles are the easiest, as you hike along a well maintained trail to Ben Lomond Peak. 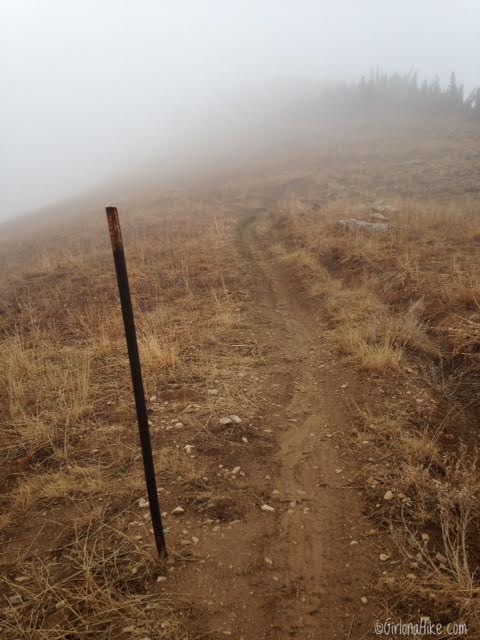 You’ll see this pole, and the trail splits. They both meet up in the same location, so take your pick. 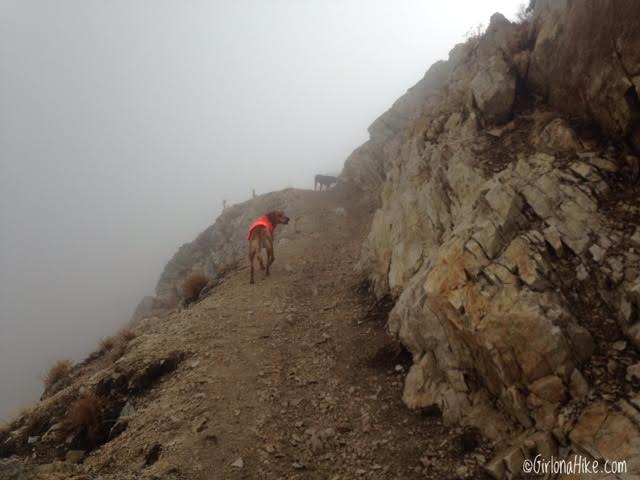 When you get close to Ben Lomond, you’ll walk along the side of this rock wall. 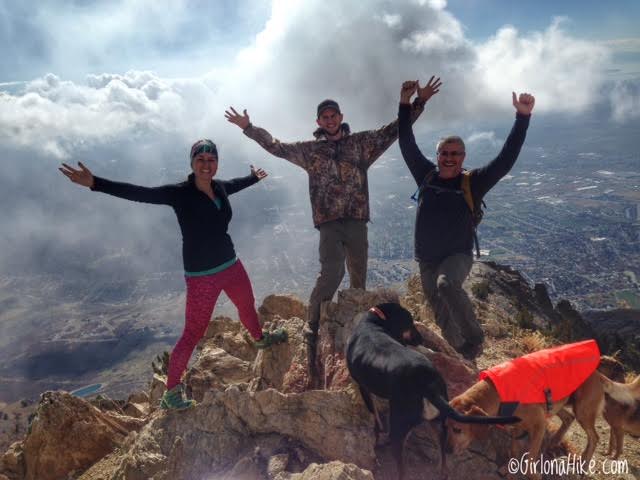 On the summit of Ben Lomond! The clouds started to clear a little, and we finally had a great view of Ogden, UT below us. 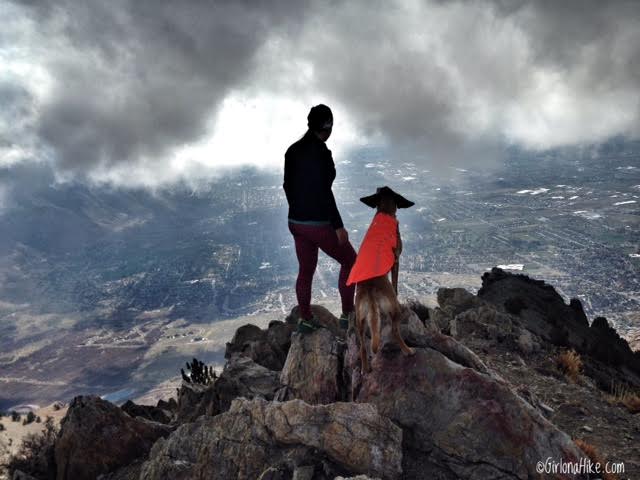 Taking in our view.

According to some sources, the Paramount Pictures Logo, known as Majestic Mountain, was modeled after Ben Lomond Peak. It is said that William Hodkinson, the founder of Paramount and a native of Odgen, initially drew the image on a napkin during a meeting in 1914.  Do you see the resemblance? 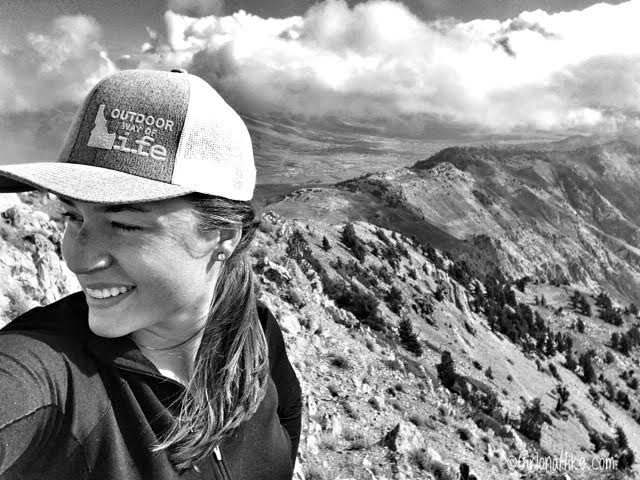 No matter what state you are in…it’s an outdoor way of life! 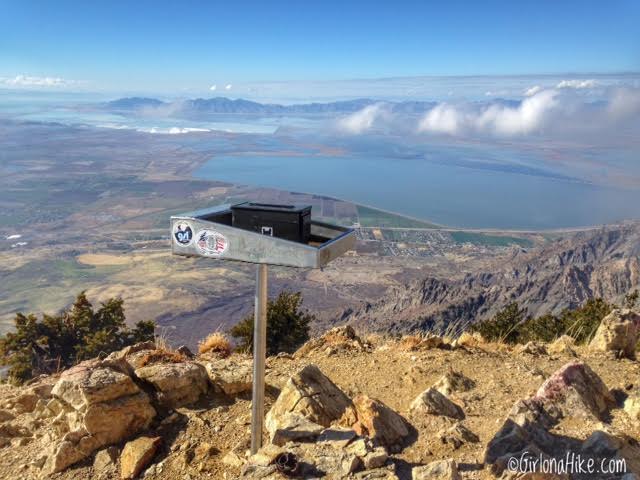 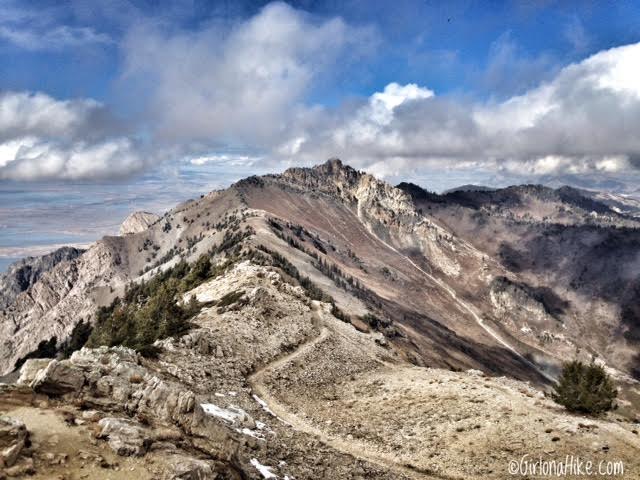 Looking back to Willard Peak and the ridge we just hiked across. 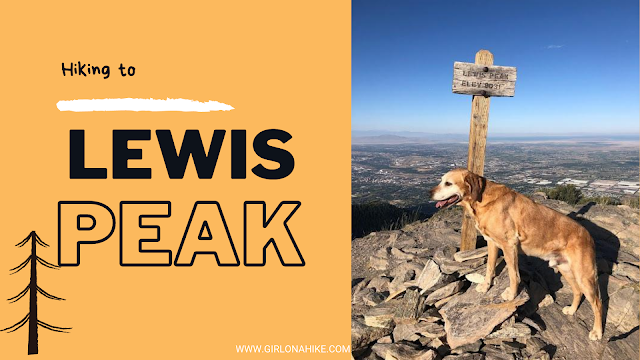 PIN now, save for later! 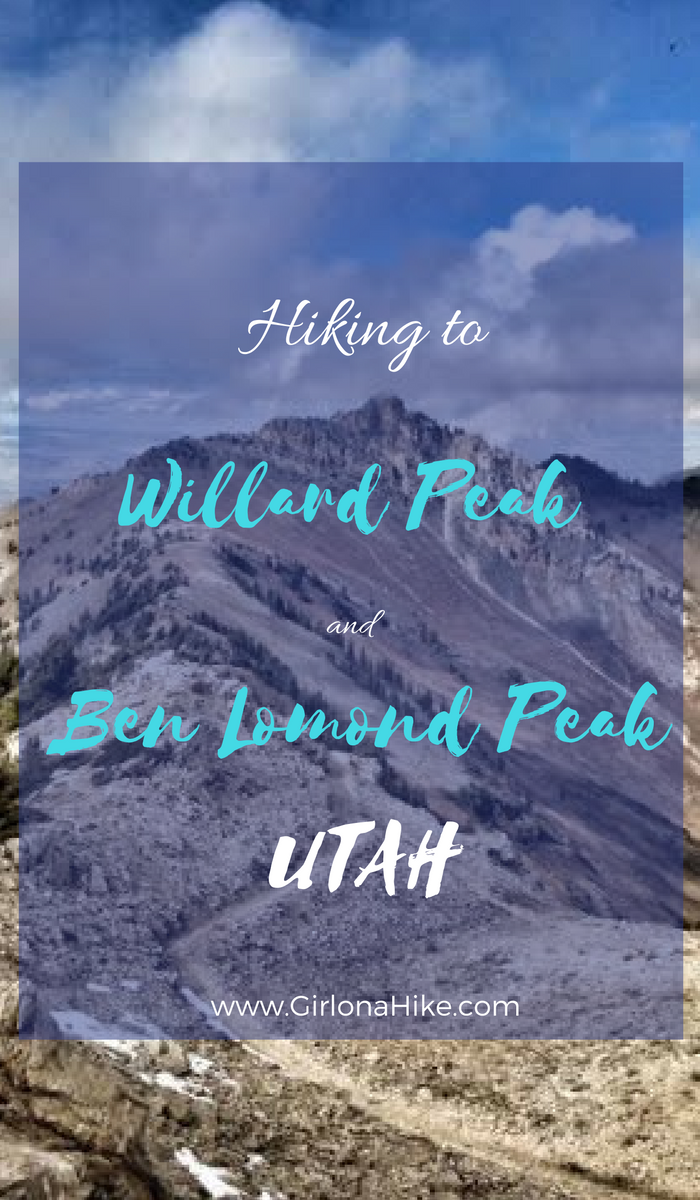 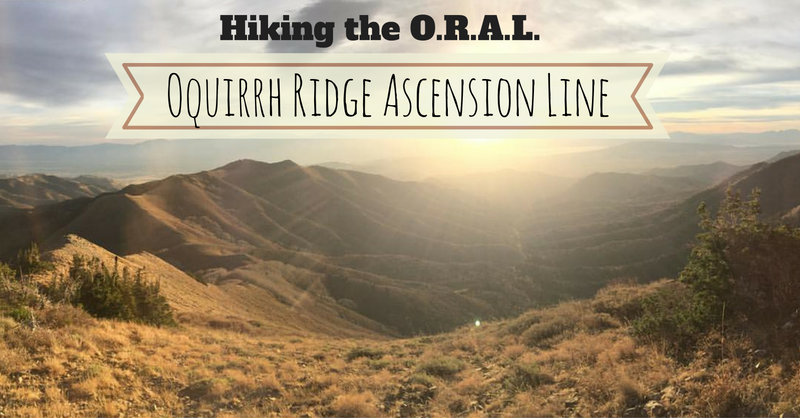 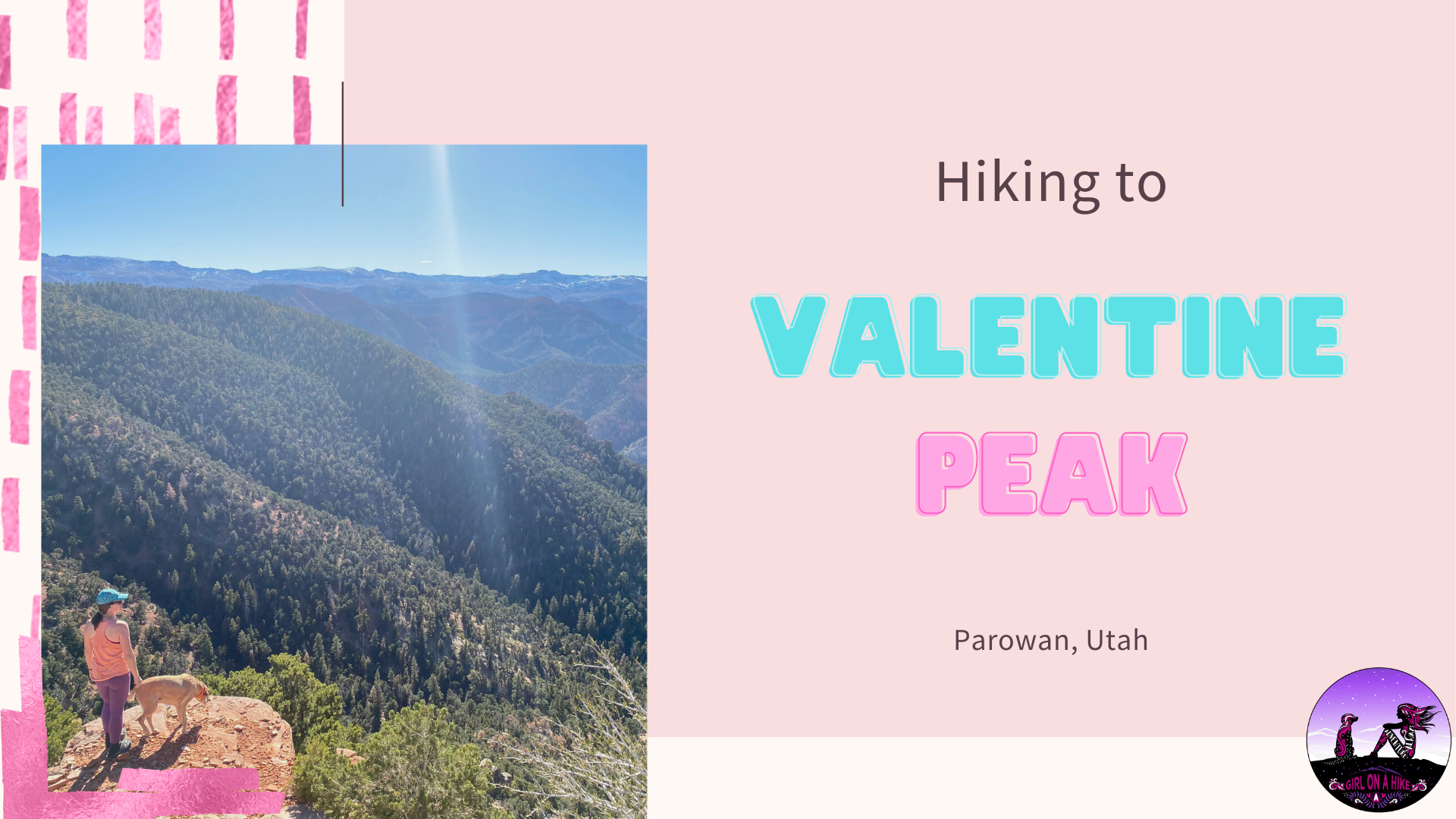 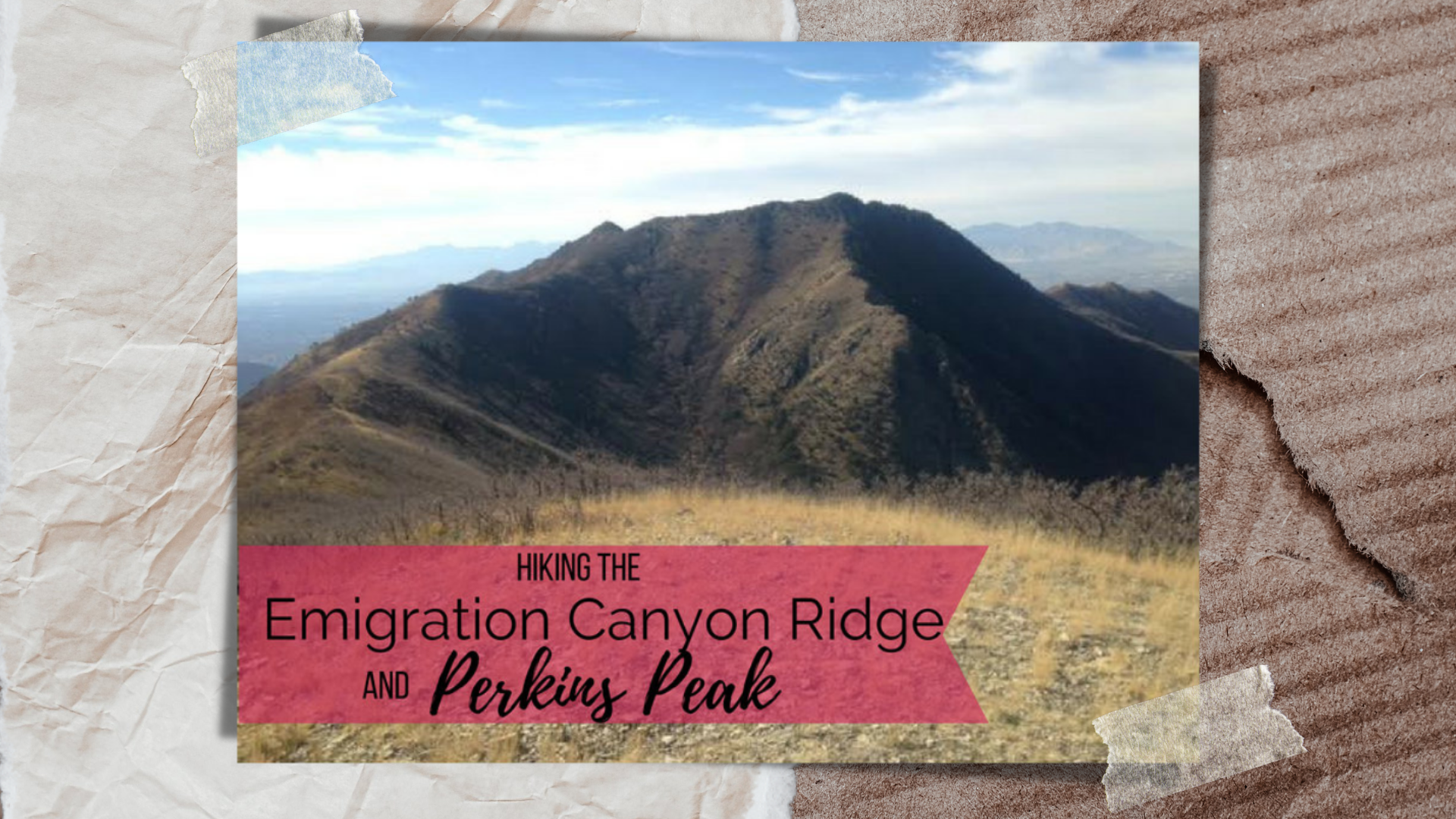 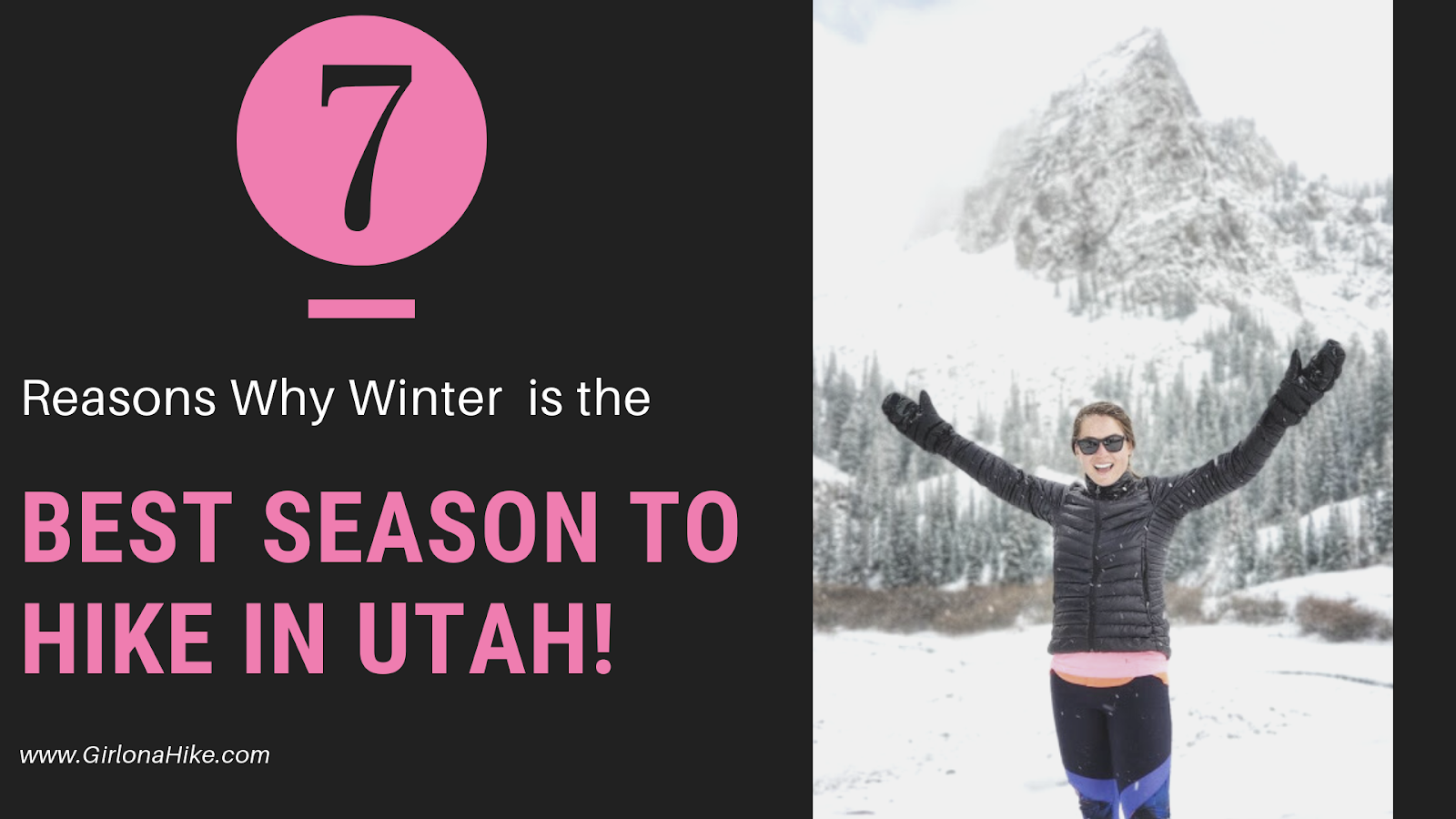 7 Reasons Why Winter is the Best Season to Go Hiking in Utah!